Thanks to Metswalkoffs for tipping me off to this story I had missed. Filip Bondy must read the Mets Police (I take credit for everything) – he wrote a nice article about the phony attendance figures they announce. Over on the left scroll down the archives to April and you’ll see a few postings about that – as the mainstream media knows, bloggers are a bunch of kooks who never write anything meaningful, right?

The Mets have been adding pretend fans in tens of thousands, each and every night. At their last two games, announced attendances of 51,489 and 47,093 werenâ€™t just exaggerations. They were dreamy fabrications.

I am not a stupid sportswriter. I know that these are supposed to be ticket sale numbers, not an exact turnstile count, and that there inevitably are some no-shows. But the Mets would require a 40% no-show rate to make this believable, and their crowd is working class. Very few Met fans are going to buy expensive tickets and then watch the game on television.

I was at these two games and personally witnessed entire, vast regions of the upper deck devoid of life. This is a stadium that seats 55,601. There were no more than 35,000 fans in the park on Monday, and no more than 25,000 on Tuesday.

A 40% no show rate would be incredible. The Mets Police are attending tonight’s game with camera in hand to do some research and will report on Friday. I hope to see Fred Wilpon there rooting on his Brooklyn Dodgers.

Tangent: when they first did Jackie Robinson night, why didn’t the Dodgers wear B hats at Shea. Fred would’ve loved it. I digress…back to attendancegate.
I do think there are a lot of fans who overbought tickets for whatever reason. Just yesterday I heard of three people who couldn’t give tickets away. In the upper deck I have overheard conversations about people stubhubbing tickets (hey scalping is official now!) or just “eating” tickets.
The weather has been awful and Shea’s not even that nice when it’s 85 and sunny. Of course a smart franchise would have built a retractable dome….

Hit metswalkoffs (and thanks for the heads up guys – bloggers unite!)
http://metswalkoffs.blogspot.com/ 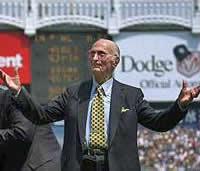 Bob Sheppard was interviewed by BustedHalo.com and dropped this great news!

My target date to be back is July 1. There is an All Star Game to be played at Yankee Stadium on July 15th and one of my goals is to be there and announce it. I did one years and years ago at Yankee Stadium but I canâ€™t recall it. So now this would be something to remember. I do want to be there next year when we open a new Stadium. And Iâ€™d like to be the one who says, â€œGood Afternoon Ladies and Gentlemenâ€¦Welcome to the NEWâ€¦Yankee Stadium.â€

Halo worked hard on this one – so check out the full read here: 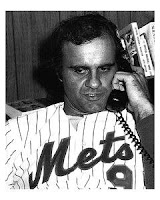 There will be two managers at Shea tonight. One will get booed terribly (including by me as I will be there). One will be cheered.

You kids that don’t know who Lee Mazzilli is probably think I photoshopped the photo on the left. Nope kids, Joe Torre once managed the Metsies, and he was awful. Not that he had anything to work with. Craig Swan, Steve Henderson and a bunch of other guys you’ve never heard of.

Anyways, take another look at the picture and ask yourself (or Omar if you happen to see him) – why isn’t this a current picture of the Mets manager. Maybe with a little less hair, maybe wearing 6 not 9 – but why didn’t they call Joe five minutes after his press conference announcing he was leaving the Yankees. The Mets could have had a manager that got his team to the postseason every year (the Mets have every financial advantage the Yankees do, so stop whining about that). Joe even had to manage from an awful start, say being 6.5 back on Memorial Day.

It’s too late now, but I’ll be cheering for the manager tonight, just not the one in the first base dugout.

Hanley Ramirez (268,386) of the Florida Marlins leads a tight race at shortstop, currently edging Miguel Tejada (256,613) of the Houston Astros and Jose Reyes (237,800) of the New York Mets. Atlanta Braves third baseman Chipper Jones has collected 420,664 votes, putting him nearly 100,000 votes ahead of the N.L.’s starter at the hot corner the last two years, David Wright (321,091) of the Mets. Jones is batting a Major League-best .418 with 12 home runs and 35 RBI. So that suggests (correctly) that no Mets will start. I like Wright and all but the other guy is hitting .418. Can’t argue. OverReyes doesn’t deserve to be on the team at all. Hurdle should leave him home and save some room for Santana and Maine.

If you’re sad that you might not see a Met on the field until after bedtime, don’t worry – Willie Randolph will be out their coaching! Ain’t that a hoot.

If Willie is jobless come July then Hurdle should invite Torre. What a circus that would be! 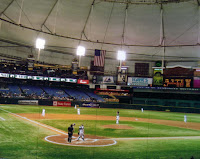 The New York Mets may have held on to a manager this week, but they’ve lost a blog.

The club that collapsed during last year’s pennant chase, is struggling this year and has a manager (Willie Randolph) on the hot seat, has been fired by one corner of the Internet.

Simon and crew have switched their allegiance to the Tampa Bay Rays and renamed the blog Rays Geek.