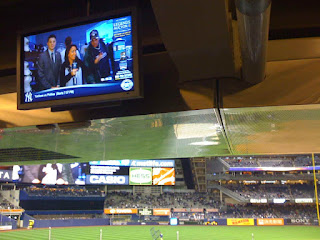 One of the nice things about my trip to Fake New Yankee Stadium is that my seat had a TV above me…and I was able to capture a picture of Scoreboard Tara.  Tara does some pre-game stuff and well I’m not sure exactly how she got the gig. 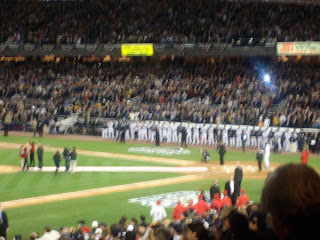 Mrs. Mets Police’s pink camera doesn’t zoom too well…somewhere in there are Yogi and Michelle Obama.  The Yankees are the best at ceremonies.  Remember the 2008 Shea Opener’s high school band? 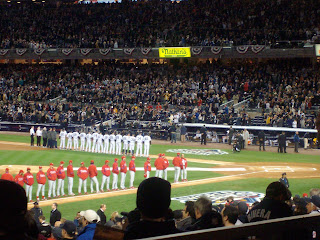 This one is a little sharper.   Nice seats, right? 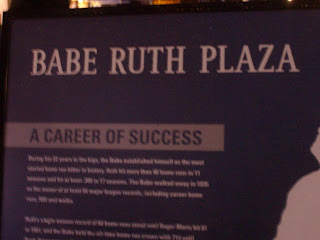 This is outside on 161st at the unimpressive Babe Ruth plaza.   The Babe deserves better. 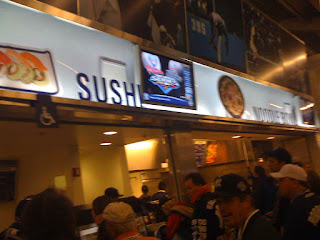 I went to Game 1 of the World Series…got super-lucky on Ticketmaster and got in for face value!

My seat was nearby this Sushi stand.   Really? 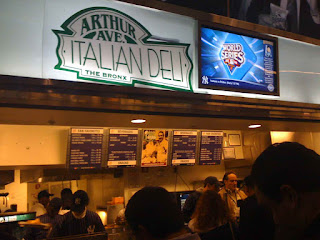 Instead I went over here…but blew this off and went to Nathans.  I’d like to thank the mayor for posting calorie counts….I was going to get an order of fries until I saw the 1200+ calories count..which by the way is like getting 6 hot dogs. 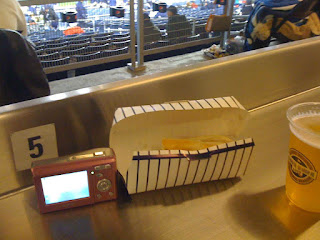 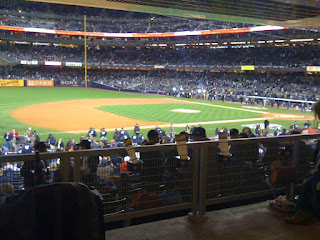 And here’s the view from my seat (behind the handicapped area, not in it – we’ll get into that tomorrow). 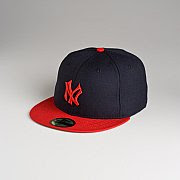 A throwback edition of alternate caps.  These from the 1910 Yankees.  I never knew they wore red, always assumed it was white in those black and white photos.  I wonder if we’ll see a 100th anniversary of this cap day next season? 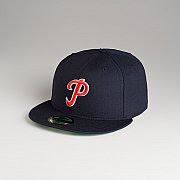 Here’s the 1934 Phils.  If you wore this to a game I would think it was cool, however if I saw you on the street I wouldn’t know this has anything to do with the Phillies so you would not get props. 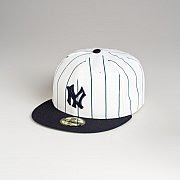 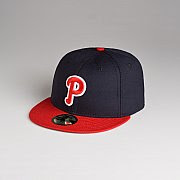 Back tomorrow with some truly awful caps.

I woke up this morning and Junior asked who won the game.   “ummm….Yankees.”

I vaguely remember Joe Buck saying something about using a Hughes in a non-save situation and I vaguely think it was 1:40am.

Poor Junior, he spent the entire day looking forward to watching the game but I had to chase him before first pitch.

I know Fox doesn’t control the weather.   They do control this “start before 8” spin which is allegedly 7:57 but  why don’t you stare at your watch tomorrow night at 7:56:59 and see what’s on TV.  I did hear Buck and McCarver float a fairly strong “how late are we gonna start?” vibe around 9pm.

Tonight the game starts at 8:20 because…..it’s a school night?  Because someone out ther actually needs football highlights after watching 7 hours of football?  In the 21st century are you really getting your scores from Terry Bradshaw?

The Yankees might wind up playing 11 games in about 30 days.  That’s not baseball.   My kid has seen about two innings.  His dad has seen about 60% of them, usually the first 6 and then the last out (Joe Buck must raise his voice).

Is this why we follow the sport?  Is the idea to have fans falling asleep during the biggest moments? 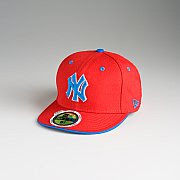 This next hat is nice, it’s orange and blue and has the traditional….oh wait I thought this was a Mets preview for a second.   Why would any Yankees fan get a cap in these colors? 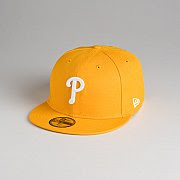 You know your friend that lives in Pittsburgh but still loves the Phillies? 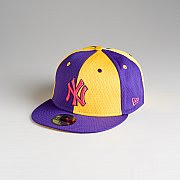 Remember that episode of Batman where the Joker bought the Yankees?   Also suitable for Lakers/Yankees fans. 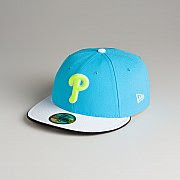 This cap falls under my “if she’s really cute” rule.   On a dude no way, but if the Phillies chick looks hot in this, it is workable.