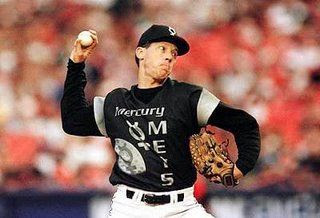 July 28, 1999
Sports of The Times; 2021? Mets Miss Chance For 1988
By DAVE ANDERSON
THE voice on Shea Stadium’s public-address system had a spooky alien squeakiness.
”Join us as we play baseball in the year 2021,” the voice announced. ”Your favorite team, the Mercury Mets, will do intergalactic battle with the Pirates of planet Pittsburgh.”
For the occasion, the Mets wore black Mercury Mets shirts with silver lettering on the front, silver numbers and names (vertically) on the back and black caps with the Mercury symbol.
All this was part of Major League Baseball’s silly surrender to the Century 21 realtors’ promotion that the Yankees, thankfully, declined to join along with the Dodgers, the Cubs and four other clubs.
It was known as ”Turn the Clock Ahead Night” to 2021, but the Mercury Mets were hoping to turn the clock back to 1988: the last time their New York ancestors finished in first place.
If the Mercury Mets had won and the Braves had lost in Atlanta, the Mets would have hopped into first place in the National League East by one-half game. But the Mercury Mets lost, 5-1, and the Braves won. So much for those silver-and-black shirts. You could almost hear the 36,337 fans grumbling, ”They never shoulda changed the uniform.”
Burn them. Better yet, put them on a spaceship to Mercury.
Please visit www.metspolice.com and help stop black uniforms.