The Mets, for some reason, have determined the best time to release good news is after 6pm on a Friday.  I don’t get it.

I also don’t get any images for posts, because they don’t send any.   Anyway..fortunately we have AI now.

Quintana, 33, posted a career-best 2.93 ERA (54 ER/165.2 IP) across 32 starts last season between the Pittsburgh Pirates and the St. Louis Cardinals. His 0.43 HR/9 IP rate was the lowest mark among qualified major league starters last season. He did not allow a home run in his final 61.2 innings, the longest active streak in the majors. Over his last 14 starts in 2022, the southpaw went 4-2 with a 1.67 ERA (14 ER/75.1 IP) and allowed two earned runs or fewer in each of those outings. He allowed more than four earned runs in only one of his 32 starts last season.

“Over the last decade, José has been one of the most dependable starting pitchers in the majors,” Mets General Manager Billy Eppler said. “Adding another left-handed option to our rotation, especially one with his durability, experience, and moxie, will give our starting staff quality depth.”

Quintana, Max Scherzer and Justin Verlander each started Game 1 of their respective team’s playoff run last season. According to Elias, the 2023 Mets will be the first team to have three pitchers who each started his team’s first game of a Postseason run the previous season. 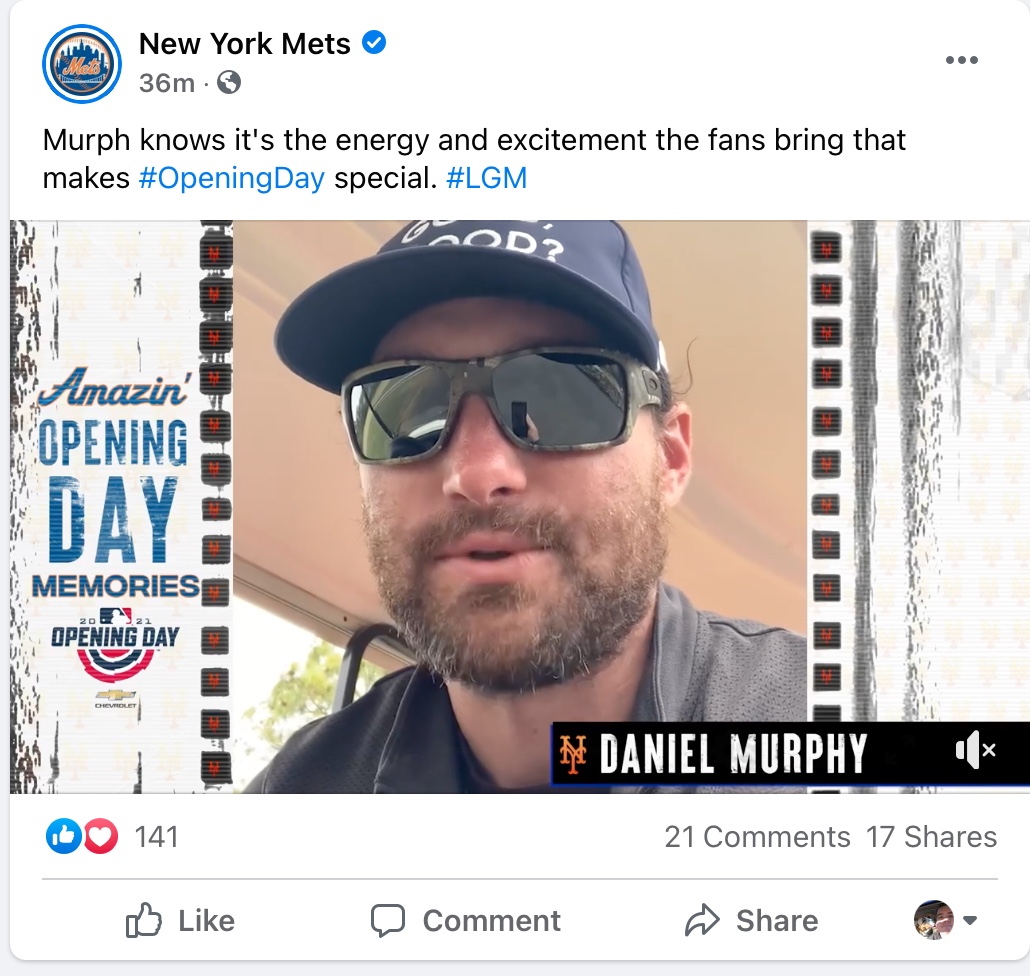 Give me a break Mets. You, under President Alderson, treated this guy with zero respect when he was here. Don’t start posting him on social media like you ever cared about him in the least. Unreal.

You idiots didn’t even START Murphy on Opening Day. You stared Brad Emaus. Why don’t you have Emaus or Neil Walker do these posts?

Someone will ask WHO CARES about the Trump stuff. Well let me answer.

Surely by March of 2021 Mike would have thoughts on topics like the pandemic, or #StopAsianHate or the Capitol Riots or perhaps what Mike thinks about fellow Trump enabler Chris Christie being selected by Steve Cohen to be on the Mets board of directors.

There is a thread here, but as far as I can tell, the beat reporters did not pull on it.

Instead, everyone played along and handed in the homework. Golly gee, Mike Piazza thinks that two time Cy Young Award winner Jacob deGrom is a good pitcher….and if that isn’t news, what is?

“I think you have to take him seriously (for the Hall of Fame) right now. I’ve never been a huge minutiae numbers guy and getting into the arguments because I think ultimately that’s for (the voters) and guys that really study the game and put perspectives in history.

“I always kind of go with sort of the character or at least the perception of dominance. I don’t know how you could not take him seriously in that regard, because he’s doing some incredible things. … and it just doesn’t seem like he’s slowing down. Knock on wood. He’s been healthy. But again, I think when the dust settles on his career and you’re able to put it in a historical perspective, that’s kind of when it will be the real sort of test.”

I don’t see any reason the beat should have been afraid to ask Mike about Trump. I imagine Mike would have proudly explained why he supported him as late as October 2020, and how great he thought the presidency was. There’s nothing wrong with believing in your candidates. Tell us Mike, why did you support his candidacy? Mike may have shared that he disagreed with the president when he called the Covid the China Virus. How are we to know what Mike believes or not if nobody asks. All I know is that Mike attended a rally in October 2020.

It has been brought to my attention that new Mets board of director Jeanne Melino’s bio ends with “Ms. Melino is a life-long New Yorker and was born and raised in the Bronx.”

The gang at Hat Club was selling these but unfortunately this one sold out before I got to post this morning.

The theme is mashing hockey with baseball – so the Cardinals’ cap in the color of the St. Louis Blues is pretty sweet (not sure Hat Club hat that one but I saw it somewhere on line).

Anyway, for the Mets they mashed with the Islanders Fisherman jersey and made this snazzy cap. Alas, it’s sold out so I will have to buy one of @mediagoon’s 10 extras.