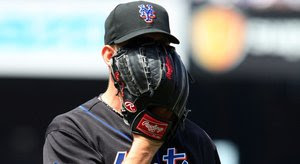 OK Mets, I get it.  You want to sell merchandise.   By now I imagine every John Franco fan from Staten Island has bought his black #45 t-shirt, owns three Piazza jerseys and now has a Santana.  I’m here to help you make even more money off those guys.

You ask, what brings on yet another rant about black uniforms tonight?   From the inbox:

Shannon — please comment on today’s ridiculous uni lineup. Mets in black shirts and caps, and Braves in dark shirts and caps too. Isn’t the point for the home team to look different than the opponent — not the same?

Of course it would make sense for the teams to look different.  The NFL would never allow this.   Baseball, who cares – everyone wear alt jerseys, screw tradition.

First let me state that I am right (about everything, but especially the black uniforms).  I will use as my source the words of…wait for it….the New York Mets!


The Mets’ colors are Dodger blue and Giant orange, symbolic of the return of National League baseball to New York after the Dodgers and Giants moved to California. Blue and Orange are also the official colors of New York State.

So now that we’ve established that black doesn’t belong, but that the Mets need to sell as many “alternate” jerseys as possible to numskulls, let’s look at the options.

They wore blue jerseys in the early 80s.  They don’t look so great, but at least they are blue.   Slap a Murphy 28 on the back and you’ll move a bunch – so long as Charlie issues them now and then (how about Sundays?)

As I walk around Citi Field I see tons of Santana jerseys.   Let’s pull out orange every 5th day and you’ll move a ton.  It could even be a quirky tradition that they only wear orange on Santana Day, and when he moves on we can pass the tradition to the next ace.  I just made that up on the fly, but I kind of like it.

Invite Willie Mays to come by, and start a tradition where the Mets sometimes wear their New York Retros.   These have tons of black, and would pair nicely with the old Giants black/orange caps – so the morons that buy black and blue jerseys can wear these instead.   Plus the Mets would actually acknowledge the Giants for a change.   Stick a Mets circle logo on the sleeve and change the number font to Mets version so the Cooperstown Collection doesn’t get upset.

4.  White jerseys with pinstripes and no black shading.

If you’re still reading you don’t need me to explain.

So how about it, Mets?  We can rid ourselves of the black jerseys and you can still make money and dress in silly color combinations.   Deal?